I was given a large bag of medium-sized peppers at work because our attempt to celebrate the last true Friday of summer was foiled by the propane tank being empty and attached by a bike lock that no one knew the combo to. So I glanced at some recipes for Roasted Red Pepper Soup, but quickly realized my peppers were multiple colors and people are dumb and generally use way too many ingredients. Below is my recommend on keeping it as simple as possible.

Let the easy recipe begin! Chop the peppers, toss in olive oil, then kick them in the oven at 450f until they start to char. Pull them out and put aside. 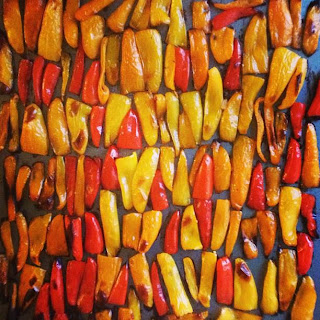 While the peppers cook, rough chop the onions. throw them into a gallon+ sauce pot with olive oil. You want them to begin to brown as well.

Once the onions have rendered, dump in the chicken stock (I used a blend of my lamb stock + chicken stock to give the soup a heavier flavor). This will stop the onions from browning. dump in peppers once they are ready. Bring to a boil.

Dump in cup of red wine (doesn't matter what kind. drink rest of bottle here). Let this simmer for about 20 minutes. Turn the heat off. Add heavy cream. Transfer soup to food processor or blender (pending your slice and dice situation)... if you have a hand blender like me (acquired today), use now. Blend until the soup's consistency is to your liking. 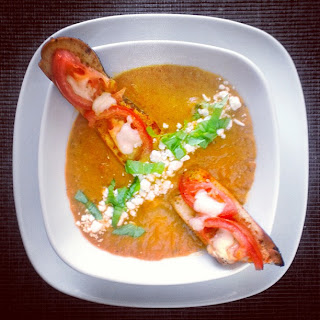 Serve - can top with some goat cheese, chives or dollop of sour cream. Great to pair with some crusty bread (I added some tomato and fresh mozzarella to top mine).

Posted by matt.koulermos at 8:10 PM