Chicken stock is a really special thing to make in the kitchen.  It costs you next to no money to make, but once you have it on hand, it feels as precious as gold.  I never would have imagined that I would become "stingy" with such an inexpensive ingredient, carefully apportioning and rationing the stock to each dish I make - it's not like it's black truffle.

Something funny occurred to me while writing this post: in the past very poor people used to use the carcasses of their chickens to stretch out their food and stay alive.  They would make stews to squeeze out the last nutrients from the animals they had raised.  These days, it's used as a flavor booster or a sauce enhancer in the fanciest of restaurants.  It seems like the "from scratch" cooking went from being necessary and entirely common, to a rare luxury.

Personally, one reason I love this ingredient because I got to (finally) teach my mom something in the kitchen.  I learned most of my cooking growing up in the family kitchen, doing small tasks and observing.  But making chicken stock as part of my cooking routine is something that I got to share with my mom.  Each time we talked, I would go on and on about how great making stock was, but she had a bad experience when she started cooking it.  I finally convinced her to make the stock again, and now we talk about different ways to use the stock in almost every conversation we have.

I've been experimenting with my pressure cooker because it seems to greatly speed up cooking times.  I looked online and using a pressure cooker didn't seem like a very popular method to make stock, so naturally I gave it a shot.  It amazed me that this method produced a really deep and dark stock in 1/3 of the time.  If you don't have a pressure cooker, just simmer the whole shebang for 3 hours, then strain.  Michael Ruhlman also has thought up a really creative shortcut to making a carefree stock that I will post on later. 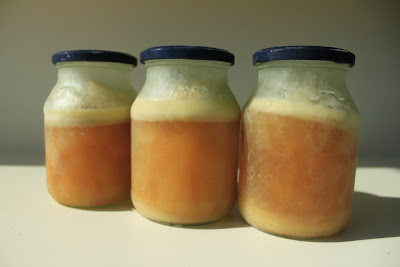 Gather all of the bones and whatever is left over from your roasted chicken.  You can either save the bones in the freezer like I do, or you can make the stock right after dinner. 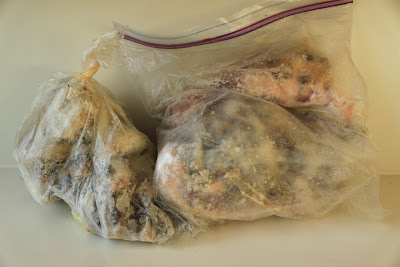 Place them in your pressure cooker and add the carrots, celery, garlic, black peppercorns, and onions. 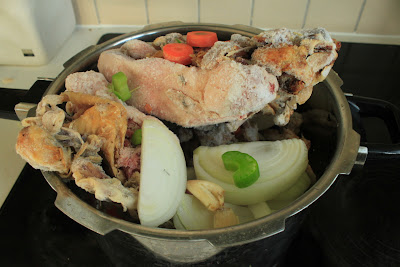 Pour water over the bones, put the pressure cooker on high heat to let it come to an easy boil.  Let it go for 5 minutes and then skim off any funky looking foam and fat.  You can do this by dipping the edge of the spoon against the side of the pot.  To make it even easier, you can move the pot so only one corner is over the heat source.  All of the undesirables will appear on the opposite side of the pot. 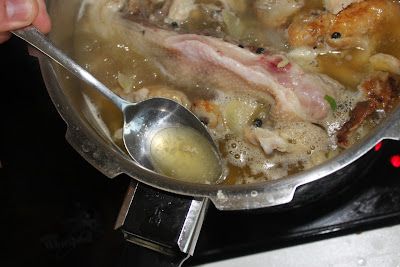 (Notice that I have a mix of raw and cooked chicken parts - I had saved the backbones from my spatchcocked chickens.  If you use all unroasted bones, it's called a white stock.  I suggest using whatever you have on hand.)

Place the lid of the pressure cooker on and make sure it seals.  Add the pressure regulator cap and turn the heat down to medium-low.  Let it hiss for 45 minutes and then take it off the heat.  Let the pressure reduce naturally (should take about 15 minutes). 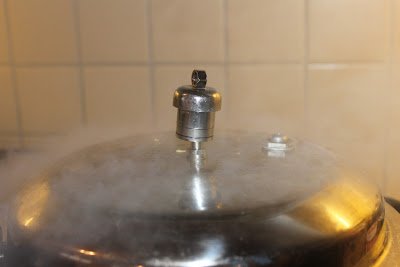 Make sure the cooker is de-pressurized before you open the lid.  The stock should smell like an intense chicken noodle soup. 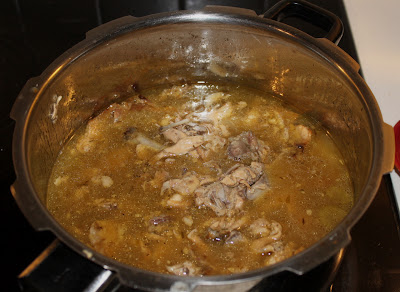 Reduce the stock down until it’s concentrated.  I suggest not adding any salt since you don’t know how you are going to use the ingredient in the future.  Unless you are using it within a few days and want to keep it in the fridge, you can freeze it in a few ways.  My mom loves freezing it in ice cube trays and then keeping the cubes in the freezer in ziplock bags.  I just pour the finished product into jars and place them in the freezer.  Don’t overfill the jars with the stock – the liquid will expand when you freeze it. 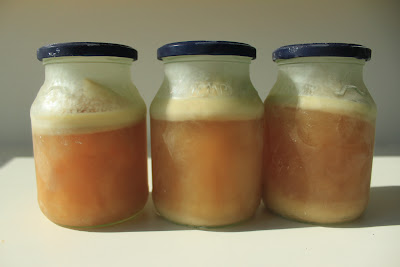 If you let it defrost after a few hours it will become just like Jell-o (because of the collagen in the bones) and the fat will solidify on the top.  This makes it easier to remove the fat – just scrape it off with a spoon.

Hopefully all of that rambling convinced you to try to make stock.  It's almost free and I can gaurentee it will elevate your cooking game.  It makes amazing soups, great fancy French sauces, and adds depth so you can swap out some of the heavy cream required for sauces.  Plus it's totally badass when you can say you made a soup totally from scratch.

Song to jam to:  George Michael - Careless Whisper
Posted by Zachary at 5:58 PM